The band started in 2012 by our drummer Fredrik Johansson and former guitarist Emil Holmström, both of them with a lot of experience from the music stage. Soon our vocalist Joakim Hermansson joined in and we were ready to get going. For some time the three of us tried out a couple of different genres, mainly Industrial Metal and Heavy Metal. During this period our second guitarist Philip Nilsson joined the group as the band’s bass player and we kept playing together for a while trying to find our own sound. In the end, we choose to go with Heavy Metal much thank to Jockes powerful and unique voice.

Late in the year of 2013 our bass player Oliver Emanuelsson joined in and Philip switched back to his beloved guitar. With a complete set-up we were ready to really get going with the band and in the summer of year 2014 we recorded our first demo. And to our help we had Linus Ohlsson and Tobias Ander, both former members of The Scams. We recorded in Linus own “Studio Raw” deep in the woods of Älmhult.

During the fall and winter of 2014 we hit the road to do some shows around Sweden with great success, and we rounded it up by playing at Christmas Day with Bullet in Växjö (hometown for both bands) in front of a big cheering crowd!

In February 2015 we started to record our debut album at Bandstationen in the small town of Ryd. To help us with this we hired Tony “Täde” Carlsson, a man with years of experience as a sound technician and musician and is now teaching music production and ensemble at the Academy of Music and Business in Tingsryd, Sweden. David Persson Hansen (Racetrack studio), a sound engineer located in Växjö was hired for mixing the album. And finally we got in touch with another man located in Växjö; Wincent Ek (Chicken Creek Productions) who we hired to do the mastring of the album.

With this album followed two singles, “Hot Rock City” and ”Radio Attack”, after the first single was released we got contacted by the record company Sound Pollution who we signed a deal with and released the album “Dirty’N’Damned” under their label Black Lodge.

After the album was released we did a lot of shows in Sweden, and a couple of festivals in Denmark and Switzerland.  In the beginning of 2017 Emil announced that it was time for him to leave the band. We didn’t have to think very long before we realized that our good friend Jonatan Lavesson would be the perfect fit, and after one rehearsal we where back in businesses! We did one warm-up show in Stockholm and then went on tour through Europe that included Switzerland, Italy, Spain and Belgium.

And in the beginning of 2017 we also started to write new songs and record demos, shortly thereafter we got in contact with our producer Patric Magnusson (RamPac) who we teamed up with for this album. We recorded the drums and bass in Växjö together with Wincent Ek (Chicken Creek Productions), the guitars and vocals was recorded in Stockholm in Patrik’s studio.

Wincent did such a great job with the drumsound that we hired him to mix the whole album, and it turned out great! To master the album we hired Lars Norgren in Stockholm. The album is called “Sing For The Chaos”. The first single from this record is “Light’s Out”, this is the first song we wrote together with Patric Magnusson, the lyrics was written the day after the terrorattack on Drottninggatan in Stockholm so even though it is a fistpumping heavy metal anthem it’s got a darker sense to it, the video was filmed, directed and edited by Jhonny Bergman (Killing Machine Productions). 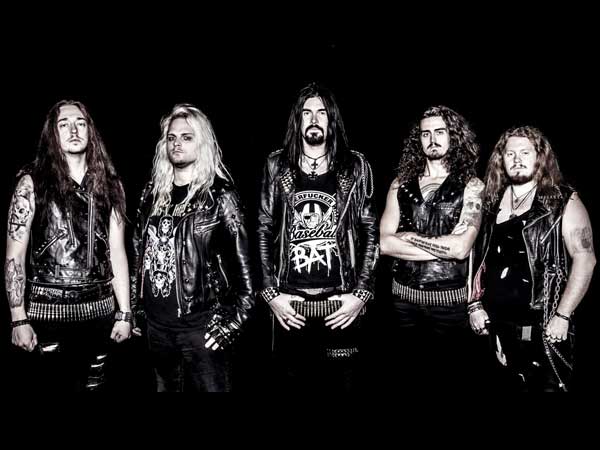