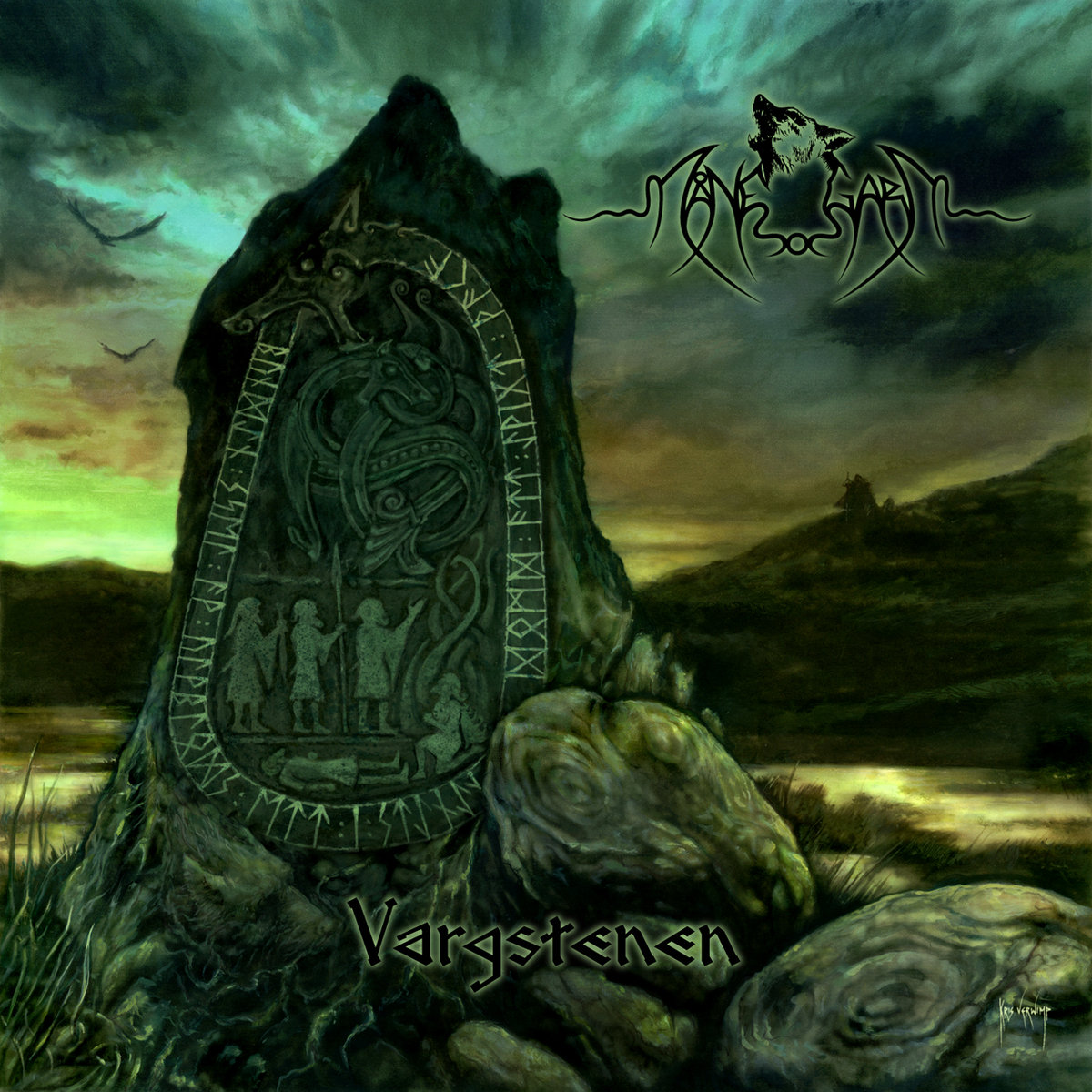 The fifth album by Månegarm.

It all started in Norrtälje, Sweden, in 1995 when three old friends; Pierre, Jonas and Svenne, got the idea of starting a metal band. They all thought that the most important thing with this new “project” was to play metal as fast and primitive as possible, and……the lyrics had to be in Swedish.

To get the band started and to get the sound that they wanted, they only had to find a second guitarist and a drummer of course……

Quite soon they found the guitarist Mårten Matsson, who played guitar in a local metal band. He thought the idea sounded interesting and joined the band. Mårten also knew a guy who had been playing drums for some months, Erik Grawsiö, and brought him along too which completed the line-up.……..

The first Månegarm line-up was; Svenne Rosendal – vocals, Jonas Almquist and Mårten Matsson – guitars, Pierre Wilhelmsson – bass and Erik Grawsiö – drums. With the temporary band name, Antikrist, they started to rehearse their very first song “Månljus” in November ´95. A month later the name of the band was changed to Månegarm. In May 1996 the band was ready to record some of their first songs and after three days in Studio Underground a four-track demo was finished. The demo tape was named “Vargaresa” and it was an over average demo with good sound and material but unfortunately quite a few labels and zines received it.

In the middle of the summer 1996, a line-up change was done. Two of the members quitted the band due to lack of interest and a new guitarist and vocalist got involved. The Guitarist, Markus Andé, was an old friend of Grawsiö’s, and Jonny Wranning, the new vocalist, had been singing with both Wilhelmsson and Almquist in previous bands. With some fresh blood and with new ideas Månegarm started to rehearse for their next demo tape.

In February 1997, Månegarm entered Sunlight Studios to record their second demo; “Ur Nattvindar”. The demo contained three songs plus intro/outro and for the first time violins and female vocals could be heard in the music. The use of the violin and female vocals gave the whole thing a Nordic “touch” and it was really the perfect ingredients in Månegarms music. Compared to the first demo, “Ur Nattvindar” was sent out to several labels and magazines and the response was very good. In the summer of 1997 Månegarm signed on to Displeased Records and the work with the first album began………

After the release of the second demo Jonny quitted the band and the hunt for a new vocalist began. Some “vocal auditions” later they finally found a guy from Stockholm; Viktor Hemgren, who joined the band. The work with the first album started and in the end of October 1997 Månegarms first full-length album, “Nordstjärnans Tidsålder”, was finally finished. The album was recorded in Sunlight Studios and it was released in June 1998. They were very satisfied with the result at that time and the response from the listeners and press was quite good. Janne Liljekvist´s violin could once again be heard in the music along with the beautiful voice of Umer Mossige-Norheim.

One year later, during the summer of 1999, Månegarm started to record their second album, “Havets Vargar”, in a recording studio that belonged to a friend of the band. It all went quite well at first but later on, due to some disagreements between the owner of the recording studio and the record label, it all suddenly ended up in a five-month break, right in the middle of the recording………..

In December 1999 they took the “half way” recorded material and went to Studio Underground for two weeks to finish the album. Viktor Hemgren had been fired during the break because of his lack of

interest and it was decided that Erik Grawsiö should do the vocals on the album. The band had suddenly become a quartet but this solution actually turned out to be a good one and as everyone can see, the Månegarm line-up is the same since that day……………the only thing that has happened is that Janne Liljekvist now is a “real” member of the band since a couple of years.

The second album “Havets Vargar” was finally released in the summer of 2000.

After the release of “Havets Vargar” the band decided to take a short break, just to find some motivation and some new ideas. After several months off, the urge for playing Rock N’ Roll got to strong and the band decided that it was time to start rehearsing for their next full-length album. With 11 great songs and with some new, fresh ideas for how Viking/Folk metal really should be played, Månegarm once again went to Studio Underground to record their third full-length album. The album,”Dödsfärd”, was released in August 2003 and it luckily meant a huge increase of the bands popularity.

In 2004 both demos; “Vargaresa” and “Ur Nattvindar”, were released on the album “Vargaresa – The Beginning”. Almost ten years had past since the start and this album; with re-mastered songs and with a new great cover art by Kris Verwimp, was released for all and everyone who were interested in hearing how Månegarm sounded like back in the days. In the same period as the release of “Vargaresa-the beginning”, Månegarm returned to Studio Underground to record their fourth studio album “Vredens Tid”. The Viking/Folk metal that Månegarm had performed the last couple of years was present of course; they had only spiced it with some more heavy metal. The album had the same catchiness as the previous album “Dödsfärd” but yet with its own identity. “Vredens Tid” was released in 28th of September 2005 and the album received really great reviews from press and fans all over the world. “Vredens Tid” has been described as Månegarms best album………..so far that is!!

Besides the release of “Vredens Tid”, 2005 also included several live gigs in Europe for Månegarm.

After ten years of hard work; composing, arranging and rehearsing songs, they finally got the chance to perform on some great European metal festivals, and metal heads in Germany, Belgium, Scotland and Austria got their share of some pure Swedish Viking metal.

In January 2006 it was time to record the next album; the fifth and last Månegarm album for Displeased Records. The album, an acoustic mini-album called “Urminnes Hävd-the forest session”, was released in 28th of June and it has received great reviews so far. This “special” acoustic album was something that the band had wanted to do for many, many years and finally this dream was realized. The music that can be heard on “Urminnes Hävd” is nothing like the regular Månegarm stuff. This time the music only contained traditional ingredients like cow drums, djembe, Jews harp, flute, violins, acoustic guitars, choirs and clean male & female vocals. This “folk” album is a tribute to our ancestors, our Swedish mythology and to the heathen flame that burn inside every man, but just as much a try to wake up that heathen flame in those who haven’t found it just yet………….

2006 can be seen as the most important year so far in Månegarm’s history with a lot of important and memorable moments. After a great two week European tour together with Skyforger and Goddess of Desire and after the release of “Urminnes Hävd-the forest sessions”, Månegarm ends their collaboration with Displeased Records and enters a new era…………

From now on Månegarm will be signed on to the Swedish metal label Black Lodge and we all think that this collaboration will contribute in making Månegarm an even better and more popular Viking metal band. In October 2006 we will enter the recording studio again to record our first album for Black Lodge. This album will be our sixth studio album and we can promise you something very special….……….