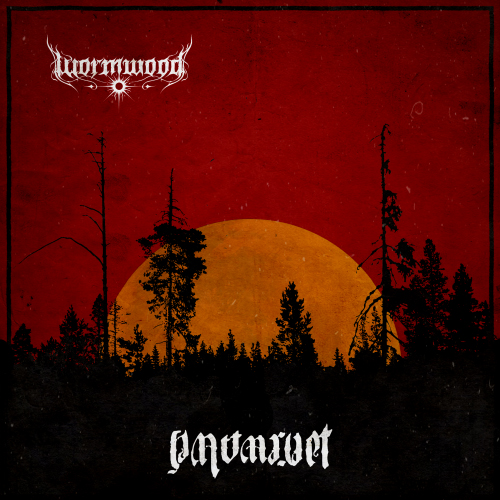 Presentation:
“Unlike other bands, Wormwood´s NATTARVET encompasses a wide spectrum of emotions.

It can be melancholy soundcapes with it’s screams of woe and somber guitars, it can be dreamlike and epic or unrelenting and viscous. NATTARVET blends genres like the changing of seasons, be it black metal, 80’s rock, traditional Swedish folk and more. Follow a story throughout emptiness, isolation, hopelessness, wonder and awe.”

SHORT INFO ABOUT EACH SONG FROM THE BAND:

Nattarvet – The Night’s Heritage
The album is about different people during times of solitude and strife. Mostly in Sweden during the famine of 1867-1869

Av Lie och Börda – Of Scythe and Burden
Like thee previous ones. The scene is set during the famine in Sweden 1860. While many people migrated to America, some stayed in Sweden in hope that it would be better. But it didn’t. These poor farmers struggled through year long winters, failed crops and unspeakable misery.

I Bottenlös Ävja – In Bottomless Mud (Guest Vocals – Mika from PAARA)
This song is about an old woman who got stuck in a bog and slowly sank to her death. Her ghost remained in the swamp and haunted the people who dares to ventured into it.

Arctic Light
Inspired by ‘In the Kingdom of Ice: The Grand and Terrible Polar Voyage of the USS Jeannette’ by Hampton Sides. This story follows a man who was shipwrecked in the 1800s somewhere in the arctic region. He’s lost and slowly driven into madness as be becomes one with the arctic light.

The Achromatic Road
An homage to the book The Road by Cormac Mccarthy. You follow a world in gray and the misery which befell this lonely man. His solitude will be his downfall.

Sunnas Hädanfärd – Sunnas Death (Guest Vocals – Erik from MÅNEGARM)
The personification of the sun, Sunna and her downfall. She’s losing her shine and all of the people will die with her. Ragnarök is creeping up and turns the world upside-down.

Tvehunger – Double/Twine hunger
You follow the wake of a pack of werewolves who ravished a town. The song isn’t so much about the beasts, but of the lycanthropy and the sadness and terror which the village felt.

The Isolationist
Yet another song about solitude. This one is a bout a man who refuses to leave his home deep in the forest. His old wife dies, yet there he remains and withers away into obscurity.

“Nattarvet is one of the most powerful, atmospheric albums to come this year.”
-NORDICMETAL.NET

“Quite literally every single aspect of this record is made with such careful craftsmanship and made with such high quality that I still can’t get over how stupendous “Nattarvet” is..”
-HEAD-BANGER REVIEWS

… ‘The Isolationist’ is in the running for best singular song released in the last couple of years, as well as possibly the best song EVER written within the general post-black subgenre…

”.. there has been only ONE time that an initial listening experience was so profound that I was almost brought to tears from the opening minutes of a song… and this album did it
-BLACK METAL DAILY