If you know your rock’n’roll encyclopedia well enough you can easily map out from where this band cherry-picked their influences – such as for example The Darkness, Airbourne, AC/DC, Bon Jovi or the way that Kiss sounded in the mid-to-late 80’s. And then we still haven’t mentioned any of the fellow Swedish compatriots (such as Hardcore Superstar, Pugh Rogefeldt, Magnus Uggla, Noice), neither have we referenced any Danish counterparts (D-A-D, Pretty Maids), or Norwegian for that matter (Turbonegro et al).
Here’s the catch though: Instead of sounding like any of all those acts in particular, STRÖM kind of sounds like all at the same time. All mixed into one giant concoction of honest, accurate, straight-forward, no-bullcrap, balls-to-the-wall, good-timin’ rock’n’roll.

Zdravko Zizmond (vocals), Calle Sjöquist (guitars), Johan Siljedahl (guitars), Joel Carnstam (bass) and Tomas Salonen (drums) have been playing together under the STRÖM banner for less than three years, but the debut album they’re putting out is a work of excellence.

When encountering a rock’n’roll band like the 5-headed powerhouse of STRÖM, you will never be able to escape the feeling that there’s a “before” and an “after”. That’s how it works – once your ears are exposed to something that you have never heard, but at the same time so damn good, you simply start asking yourself: “How the hell is it possible that no one has done this before?”

STRÖM’s self-titled debut album is set for release on September 23, 2022. 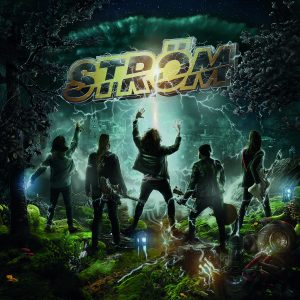